In one of the climactic scenes of the "The Shawshank Redemption", the main character, Andy, has the gall to strut around in the warden's buffed shoes on the eve of his secret and daring escape.
The narrator states: "The guard simply didn't notice. Neither did I. I mean, seriously, how often do you really look at a man's shoes?"


Great movie, but I do have to disagree with that last line. Any woman will tell you she almost always notices a man's shoes. Case in point:  on a dress-down Friday, I once showed up to work eager to show off a gaudy but fancy new watch (that I couldn't afford). Waiting for the compliments to roll in, I remember one of my co-workers complimenting  my shoes but completely ignoring the new watch. Lesson learned.


Now us men needn't obsess and fetishize shoes as the way many women do, but we should own a few nice pairs. 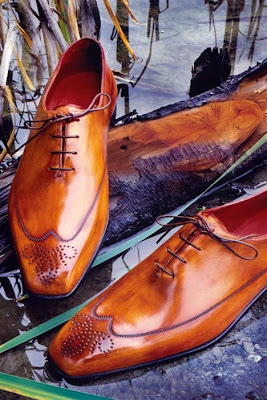 Here is on my own little primer on men's shoes:

Style
There are simply too many styles of men's shoes to list in this post, but the main broad categories are: laced, non-laced (moccasins/loafers/slip-ons) and ankle-high boots.

Although there are of course multiple factors, the most formal type of men's shoes are typically laced. Slip-ons such as loafers are slightly more casual but can definitely be coupled with a suit.

Ankle-high boots were once an absolute no-no with a suit, although  that has changed in recent years, assuming you wear the right kind of boot.  All other boots are still verboden. Wearing ankle-high boots with your suit definitely gives off a more informal vibe, so I would not wear them on your wedding day. 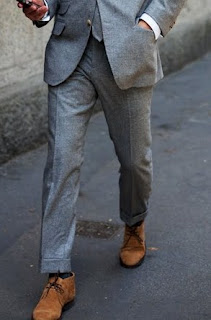 Some ankle-high boots can be worn with a suit 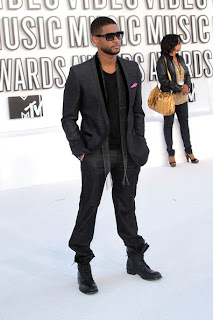 Usher shows just why you shouldn't wear combat boots with a suit.

Colour
The safest and most conservative business shoe tone is black, no question. Black shoes can be worn with almost most any suit pattern and tone, except white (although if you're a black-shoe-only guy, chances are you don't own a white suit anyway). Black is generally the best option for greys, especially Prince of Wales patterns. 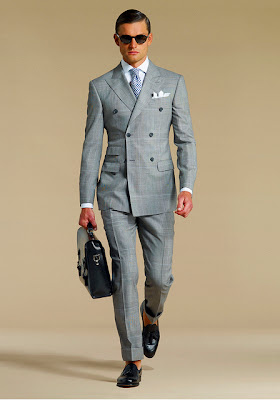 Black shoes can be worn with almost any suit tone.
Brown is also a very safe choice. Some would argue that brown should be the default shoe tone, especially when paired with the unquestionably classic, navy business suit. 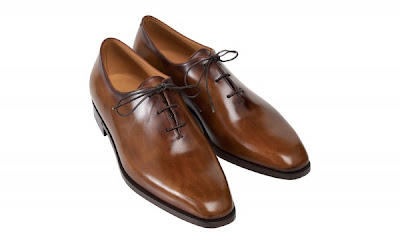 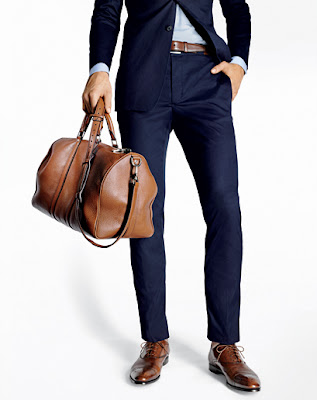 Another shade that is also business-acceptable, but with perhaps a bit more oomph, is oxblood (or burgundy). 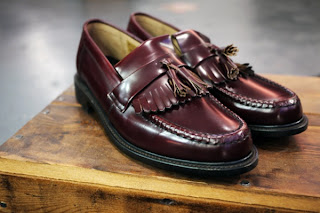 Tan shoes or light brown tones are also acceptable, although they will provide a starker contrast with conventional office suits, so be forewared, ye pencil-necked accountants. 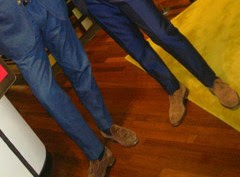 There is a whole spectrum of tan-brown shoes, with many men's styles even having a bit of an orange tint to them.
The great thing about all of the tones mentioned above is that they can all be worn with jeans or khakis, the only exception being black shoes if they are too formal. 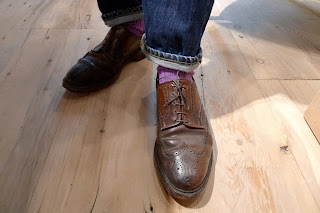 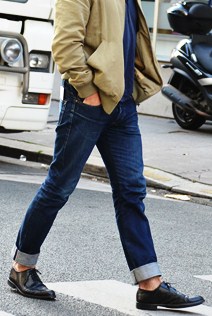 Just about any tone goes great with jeans.
Sole
My first rule for shoes, especially dress shoes, is that the sole be made of leather. Whenever I inspect a shoe, I immediately flip it over and give the sole a loud knock with my knuckles to assess the leather. I'm not quite sure what that accomplishes, but in my mind my knuckles can discern the "pop" of a genuine leather sole.

It's amazing that I haven't yet been kicked out of a shoe store. The composition of the sole usually even isn't a mystery as  leather soles are often marked "vera pelle". 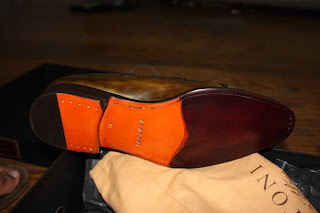 I also would go so far as to say that rubber soles aren't really appropriate for the office. In fact, with a few exceptions, I don't really care at all for shoes with a non-leather sole
Most "casual" shoes with a rubber sole are simply tacky. I know some men fear the formality of wearing leather-soled shoes with their jeans or khakis, but they really shouldn't, as a leather sole is almost always the more stylish choice. 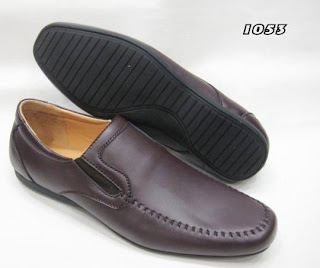 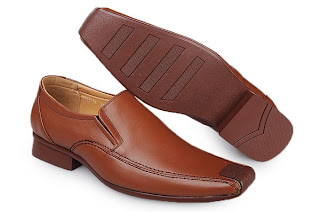 These rubber-soled shoes shouldn't be worn in the office. They really shouldn't be worn at all.
I do make some exceptions of course, as I like to have a pair of casual, rubber-soled shoes to wear when it's wet outside or if I know that I'll be doing a lot of walking. As discussed further below, bucks and desert boots (or anything suede) spring to mind as good options, but overall, it is a bit challenging to find a stylish pair of shoes with a rubber sole. 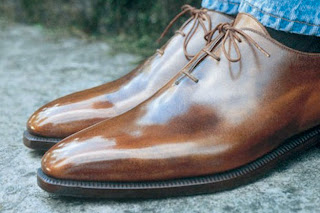 I like sleek-looking shoes with few pieces of leather 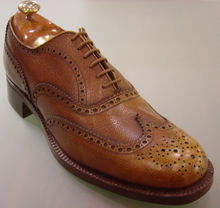 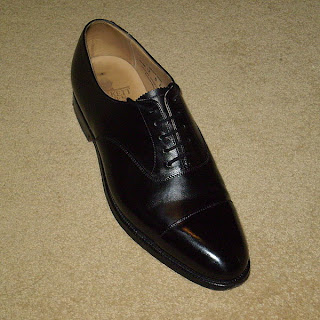 However, I don't care for these these cap-toed Oxfords-- too much stitching.

Two-tones
Two-tone shoes (also sometimes called "spectator")  make a definite statement and are bound to get you noticed. As such, they cannot practically be paired with a business suit. Black and white are the most common variety. Brown and white are popular too, but you can really find them in almost any colour combination. 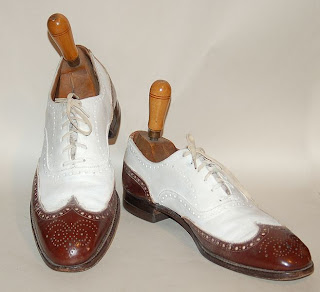 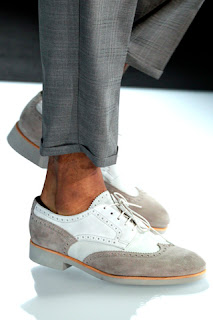 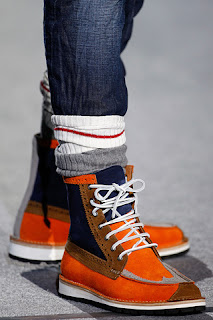 Fabrics
Needless to say, more formal shoes should be made with a leather upper only. Don't dare wear vinyl unless you have the leisure suit to go with it. Exotic skins such as ostrich, snake and alligator, though pricey, are usually flamboyant and/or tacky.


Overall, there are only a few acceptable alternatives to a leather upper, and they are mostly niche items in high end fashion. For example, some shoes have a leather and canvas combination, or completely canvas, for a very casual summer look. 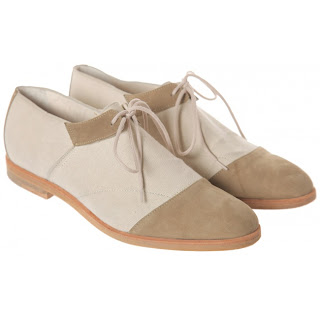 Canvas and leather combination shoe
In recent years, suede shoes have made a big comeback, especially the ankle-high variety sometimes called desert boots. In the 80's, desert boots came in just a few basic earth tones, but nowadays you can find them in all manner of  colours.
Additionally, suede shoes and boots also come in brogue patterns, and have become one of the trendiest items in footwear over the past few years. 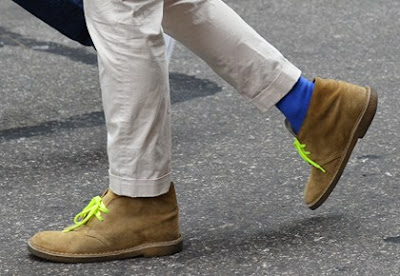 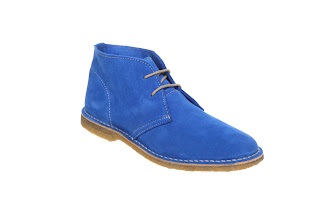 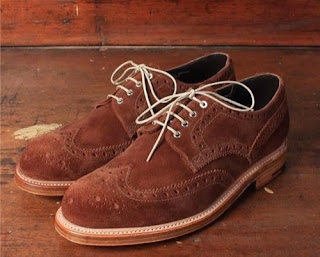 When I spoke above about exceptions to my leather-sole rule, I was mostly referring to suede boots and shoes. Suede moccasins have afforded men the opportunity to flash some quirky colours into their wardrobe. Green or purple oxford shoes would be extremely tricky to pull off, but somehow seem effortless as a suede moccasin. 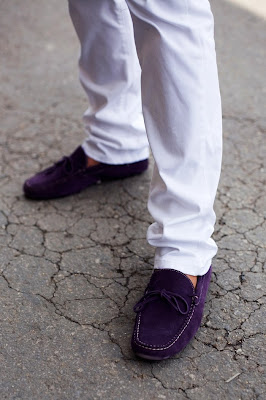 Moccasins can add a nice splash of colour
Another good casual option are called bucks which are also usually suede and have a rubber sole and are currently very trendy, albeit with modern twists. 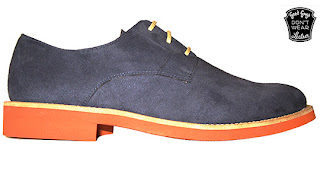 Toe Shape
Be mindful to avoid shapes that are overly trendy, especially the ones that are stocked in cheap shoe stores. Square toes became popular in the mid/late 90's, but there were some people who hated them then, and certainly today. There is a bit of a the Goldilocks phenomenon, namely in avoiding shoes that have toes that are too square, too round or too pointy. 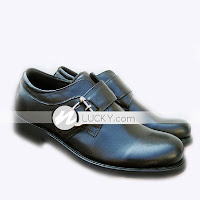 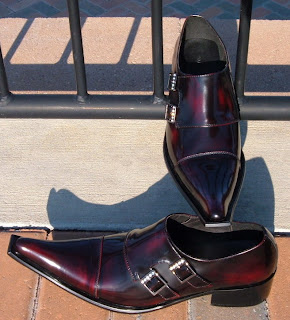 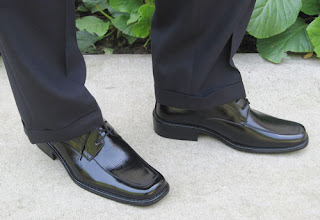 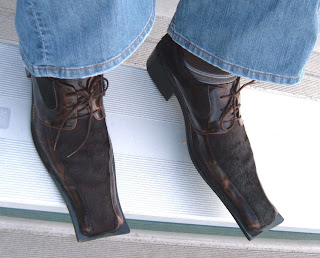 Instead, try to find a classically shaped toe that more closely resembles the natural contour of the foot. 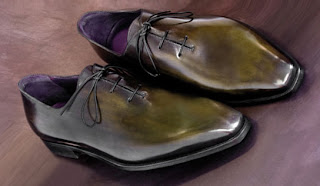 -The Scandal
Posted by StyleMounties at 12:02 PM